Edward Thomas Hardy, known as Tom Hardy in the sterling kingdom of Hollywood suffers a massive problem. It often breaks his heart and displeases him no ends.

Wherever he goes, whatever he does and whosoever he meets as part of his acting assignments or work related endeavors, there is an incessant fear as strikingly exuded by those eyes that the man commands. Perhaps it pushes people to keep a distance from his imposing and muscular frame. The commoners or those 20 something’s who have just started on their big dreamy  journey on the red carpet would perhaps take this facet in their stride, many of whom may begin to think that it is a mark of upcoming success that people think of them as commanding a certain respect that leads on this momentary lapse of reason, leading to ‘fear’.

But, the 37 year old movie star from England is pained by this public move. He is a kind hearted fellow and many who refuse to believe, a soft spoken milled mannered man who is as approachable to fans and critics alike as he is patient in hearing their candid expressions about their loving star and their berated action figure from the charming world of movies. In Thomas Hardy, born in 1977 on September 15, Hammersmith, the popular city lying West of London has produced after a long time- an actor of high caliber and one who for some strange reasons rests his massive talent for the world of action-adventure movies. 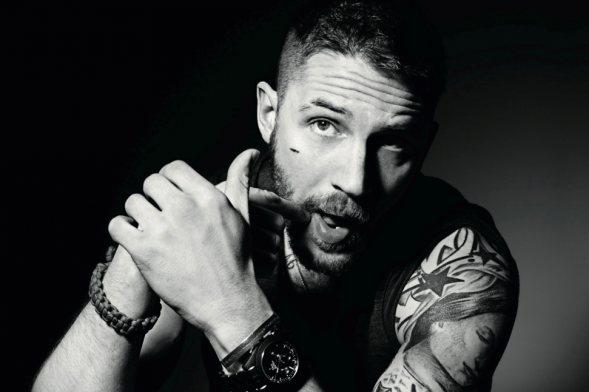 This isn’t a prejudiced affirmation to the fact that he cannot and has not starred in dramatic roles but knowing his repertoire and personal interest, West Londoner Hardy is here to stay to make a mark ever so interestingly in the fast depleting world of adventure action movies whose success in true sense of the word isn’t determined by the hero’s acts but by the tenacity he is made to bear at the hands of the merciless baddie. 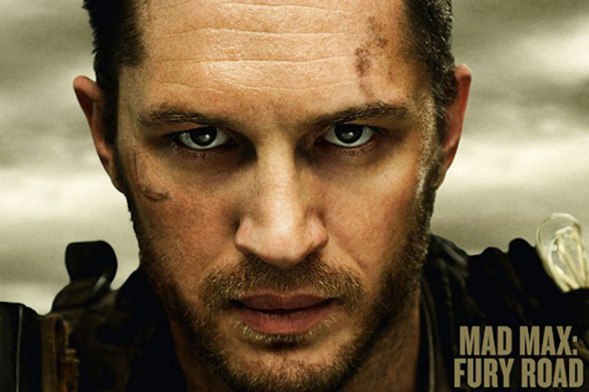 Tom Hardy who will turn 38 come September 15th will once again be at the middle of an interesting script reading, the third successive occasion where he has worked nonstop without a break on his own birthday. The burlesque built English actor who once wasn’t an iota of the muscle pound that he sports today was a thin, frail looking youngster when he first broke out on the silver screen way back in 2001.

The word silver screen for many dreamy eyed youngsters who all wish to rule the glowing Hollywood dynasty is nothing short of a literal potion of the Holy Grail, for it is this sacred place they all wish to visit to make their fortunes. Hardy, who first arrived on the big screen got a phenomenal break in the form of the popular and widely loved series, “Band of the Brothers”. The Tom Hanks – Steven Spielberg production and startling narrative about the true events in the life of Easy Company: the 506th regiment of the 101st Airborne division of U.S. army delivered war film lovers with a tantalizing tale of courage, bravado and the supreme sacrifice of putting the country before the self. 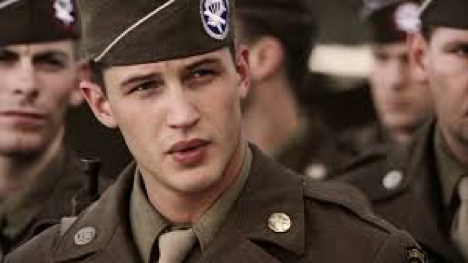 Tom Hardy, was still a relatively unknown first timer who not many recalled save for the easy pronunciation of his name prior to the start of this HBO Miniseries but by the time this swashbuckling tale of U.S. Army’s heroes went on to finish its final episode in November, 2001- Hardy’s hard earned characterization of one of the courageous and adventurous young army soldier took his career graph to sizeable reckoning. Women in LA, London and New York noticed this bright youngster with glowing skin, twinkling enough to startle television screens with the splendor of his phosphorus white color.

Tom Hanks and Spielberg had brought to the front-face of a Hollywood in dearth of need to do away with mindless beefy built action stars with a person who could act the part well. In their unearthing of another Tom, Hardy hardly disappointed movie going audiences who love to sight an action star beat up the goons and deliver promising and punchy scores on the film screen.

That beefy guy who made a name in Action thrillers 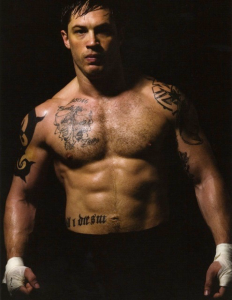 Post the IMDB rated 9.6 on 10 ranking of Band of Brothers, Tom Hardy worked his way up to the top of the screen charts, starring time after time in a gamut of enterprising but medium budget flicks that belted action successes, saving bored movie lovers from the odds of having to survive dull headed, script-less tales.

His latest release has been the commercially successful Mad Max: Fury Road, the post-apocalyptic action thriller, the fourth installment in the massively entertaining series, where rebel forces attempt to thwart the cult figure of Immortan Joe ( Hugh-Kyes Byrne) who is ultimately helped by Hardy’s Max Rockastansky who joins hands with Imperator Furiosa (Charlize Theron) in fleeing Joe. Scoring great grades around the world, even outside USA for its fluid action sequences, blood boiling action adventure sequences, Tom Hardy delivered a nice hit, much to the respite of fans who were disappointed with the earlier installations of the Mad Max series.

Not many come to imagine a movie script that beautifully ensembles a musical score to tightly knit a mystery thriller saga! In 2015’s London Road, directed by Rufus Narris, an entertaining cold blooded murder mystery based on the life of serial killer Steve Wright, the notorious fiend who is serving life imprisonment in London, convicted for 5 spine chilling murders of women, Tom Hardy not just starred but shined as a clever investigator, catapulting the move based on a series of back to back interviews with the serial killer to a sweeping box office reception and ultimately, the prestigious screening at the Toronto Film Festival (popularly known as TIFF). 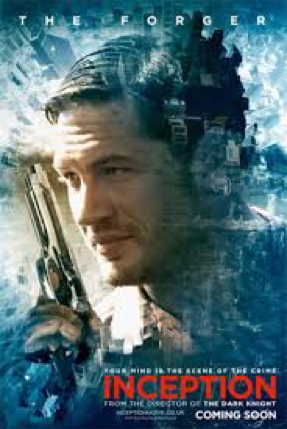 Not many remember that it was Tom Hardy, credited as Thomas Hardy who starred in the commercially successful American war film, “Black Hawk Down”. He also earned swift accolades from the harshest of critics for his villainous act in Star Trek: Nemesis (2002). An alumni from the Drama Centre of London, a place where nobody’s come in to emulsify themselves with the fragrance of becoming an actor, Hardy had decided somewhere from 2003 onward that he wasn’t ready to limit his outstanding talent to only break bones and smash heads on-screen.

He made heads turn in 2006’s Scenes of Sexual Nature, a critically acclaimed comedy about a group of youngsters understanding what they mean and wish to seek in the tumultuous yet gratifying act of sex, who many restrict to being an arduous impulsive act. Hardy, who starred with the respected Hugh Bonneville made audiences think of the widely debated theme from a discerning eye and deeper understanding. His most memorable outing outside his favored action thriller domain was in Christopher Nolan’s Inception (2010). This science-fiction, thriller- adventure drama, only didn’t have a comic genre thrown in, in its otherwise surprisingly and at times, head-scratching depiction of the enchantment and illusion associated with our “dreams”.

To this day, those who boast about their love for Inception, Christopher Nolan’s triumph from a cocktail of wonderfully acted performances played out by Leo Di Caprio and Tom Hardy don’t really understand the confusing delirium that emerged from the multiple award winning film.

“It is easy to claim that one has truly understood the imposingly dominant themes of films like Inception and The Matrix (Keanu Reeves 1999) but there are more to these films than meets the eye”, shared Hardy. He wasn’t ridiculing his fans who he loves but asking them to delve deeper into the world of cinema that often requires us to orchestrate our brainwaves in an inertia that augurs for elemental thinking and not easy enjoyment we all feel happy to derive from our movies.

The only villain who broke the Batman 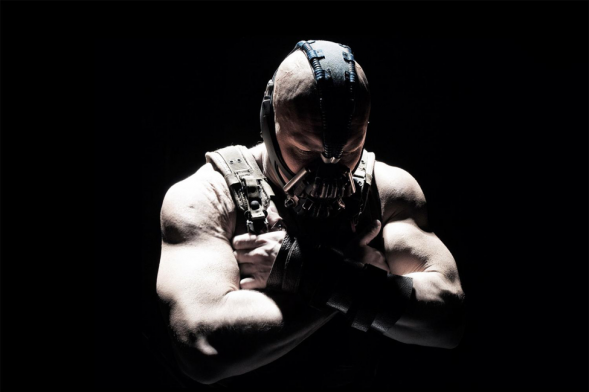 In 2012’s magnanimous box office hit and critically acclaimed conclusion to the famous Batman Trilogy movie, “The Dark Knight Rises”, Tom Hardy  did something no actor ever did on the silver screen. Starring as the monstrously built Bane, the evil adversary to Gotham’s Dark Knight (Christian Bale) Hardy powered his character, the fearsome mask wearing opponent to lift none other than Batman with both hands and broke his back.

In one of the most candidly filmed sequences, and what many regard as perhaps the best action sequence from all the 3 tightly scripted and supremely acted movies saw Batman being humbled effortlessly by his greatest adversary since the clever Joker. Bane, played by Tom Hardy was by no means an easy character. Veiled by a mask that masqueraded at least half of his face, Bane delivered not just haunting monologues to Gotham’s best in a fight sequence he literally owned given his brutal onslaught delivered to the savior of Gotham city’s legendary knight but exhumed and hurled, in equal parts, absolute terror onto Batman’s den that saw the city crumble like a piece of paper, ultimately propelling Batman to rise from the ashes and to claim his home from the deadly hold of evil mercenary Bane. 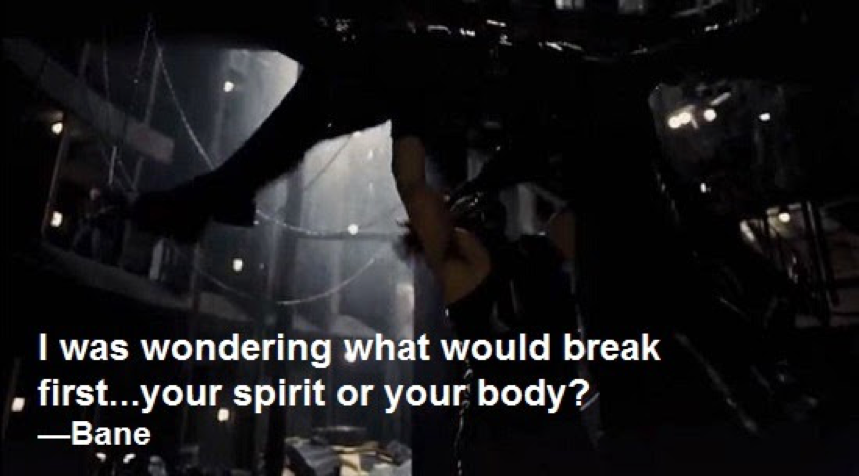 If truth be told, Tom Hardy, sans any bias for all the rigor he extolled upon his character, pumping iron and sporting a hauntingly scaring bald scalp whilst speaking in that deathly harrowing sonorous voice, did something as extraordinary as Heath Ledger’s monstrous personification as the Joker (The Dark Knight, 2008)

That we have amidst us a talented and gifted actor who is charming as a villain when most clans of goons fall miserably short of being classy villains goes on to confirm Thomas Hardy’s status as an ultimate baddie who can act well the good part too. See 2015’s The Drop for yourself. Bad men can often surpass goodness in a delightful slice of acting. Thomas Hardy, you deserve to rule the box office for years to come. 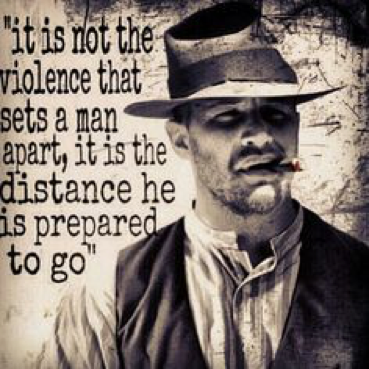